Tonight Belongs to You Tour

Tonight Belongs to You Tour

Concert tour by In Real Life

The Tonight Belongs to You Tour (abbreviated as TBTY Tour) was In Real Life's debut concert tour named after their fourth single, "Tonight Belongs to You," which was released earlier that year in July. It began on September 9, 2018, at The Filmore in College Park, Maryland, and concluded on November 11, 2018, at SM City Cebu in Cebu City, comprising of 27 dates.[1] Insular Life, the first Filipino life insurance company, supported the Philippines leg of the tour. Additionally, JAGMAC and Spencer Sutherland were announced as the opening acts.

To Soundigest, Chance Perez shared, "I've been anticipating this tour for so long! I can't wait to get out there and share all the new songs and choreography that we've been working on. This life is every childhood dream I've ever had, come true. Tonight Belongs to You Tour is going to be one to remember. Drew Ramos added, "The fans can expect new music and new choreography. They're going to see something completely new from us. We're putting our all into this show and we hope our fans will love seeing something new!"[5] To Central Times, Sergio Calderon said, "This is the first [tour] that's just us, so it opens your eyes and makes you realize how many fans you have all around because I never knew how many people supported us. It's been super fun." In the same interview, Brady Tutton mentioned that his favorite song to perform was "Eyes Closed" because of the nostalgia.[6]

Alessandra Guarneri of UnitedbyPop wrote a positive review, stating, "Their choreography, in-sync harmonies, and contagious smiles made it nearly impossible for fans to look away. Each member was given the opportunity to shine with an individual performance, as well as through their own communication with the crowd in between songs." They added upon the inclusion of cover songs in their set list, "This made for an interactive show in a more intimate venue, which is an ideal experience for any fan or concert-goer."[7] Additionally, Beyond the State remarked of the Chicago show, "perfect night for great vocals, a perfected stage presence, genuine fan interaction and more."[8]

The following set list is from their first show in College Park, Maryland. It is not intended to represent all dates throughout the tour.

★ Brady lost his voice for the first two shows, unable to perform his solo, "Stay".

★ Conor became sick and had to do vocal rest for the Detroit show.

★ The band could not perform "Someone Like You" anymore, Boston being the last show for this song.

★ Drew and Sergio celebrated their birthdays during the North American leg.

★ Chance celebrated his 21st birthday in the Philippines. 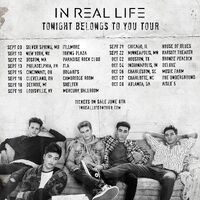 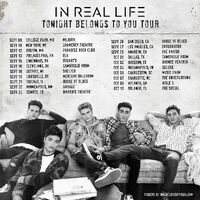 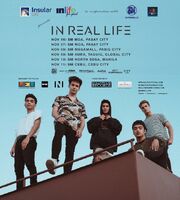