Planet Hollywood is a theme restaurant inspired by the popular portrayal of Hollywood. The company is owned by Earl Enterprises corporation, founded by Robert Earl. It was launched in New York City on October 22, 1991, with the backing of Hollywood stars Sylvester Stallone, Bruce Willis, Demi Moore, and Arnold Schwarzenegger.

On September 15, 2017, In Real Life visited Planet Hollywood for the world premiere of their music video "Eyes Closed" at 5 P.M EST.[1] Later on September 22, they held a meet and greet in The Forum Shops at Caesars from 6-8 P.M.[2] In 2018, they were at Planet Hollywood in Disney Springs, Orlando for the fan event on May 18th. On August 24, 2019, they are doing a release party for their debut album, She Do, at 10 P.M at Times Square. Similar to their “Eyes Closed" music video premiere, anyone can attend. 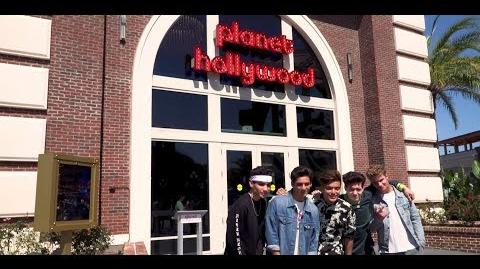