An MTV Video Music Award is an award presented by the cable channel MTV to honor the best in the music video medium. The statue given to winners is an astronaut on the moon, one of the earliest representations of MTV, and was informally called a "moonman". Since the 2006 ceremony, viewers are able to vote for their favorite videos in all general categories by visiting MTV's website.

The annual VMA ceremony occurs before the end of summer and held either in late August or mid-September, and broadcast live on MTV, along with simulcasts on MTV's sister networks to nullify in-house competition. The first VMA ceremony was held in 1984 at New York City's Radio City Music Hall. The ceremonies are normally held in either New York City or Los Angeles. However, the ceremonies have also been hosted in Miami and Las Vegas.

In Real Life attended the 2017 MTV Video Music Awards at The Forum on August 27, 2017.[1] It was their first major award show a few days after winning the show, Boy Band.[2] Later on August 20, 2018, they went once more seeing artists like Bazzi, Panic! at the Disco, and Jennifer Lopez perform. 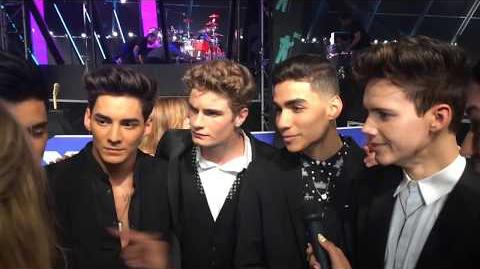