In Real Life Wiki
Register
Don't have an account?
Sign In
Advertisement
in: Bands, In Real Life, People

In Real Life (also referred to as IRL) was an American boy band that formed in August 2017, composed of Brady Tutton, Chance Perez, Drew Ramos, Sergio Calderon, and Conor Michael Smith. They were signed on with Johnny Wright's Wright Entertainment Group (WEG).[1]

In Real Life reached the top 10 on the iTunes charts with their first single, "Eyes Closed". Their song "Tattoo (How 'Bout You)" reached number 29 on the pop charts[2] and their "Tonight Belongs to You" music video reached 2 million views in less than a week. In June 2019 their single "Crazy AF" reached top 40 on pop radio.[3] Their debut studio album She Do was released a day before their 2-year anniversary on August 23, 2019.

In 2017, the five were assembled on the reality television singing competition, Boy Band. The show premiered June 2017 on ABC with hostess Rita Ora, and "architects" Backstreet Boys' Nick Carter, the Spice Girls' Emma Bunton, and Timbaland. The 10-episode season began with thirty young male vocalists competing to become a member of the new five-piece boy band. Each week, the boys would rotate into different groups and perform, and at the end, the "architects" would put either two or three boys up for elimination. Through live voting, a boy would be saved by America. At the end of the season, the final five remaining boys would form the boy band and receive a recording contract with Hollywood Records.

After a 24-hour voting period the week before, it was announced at the final live show on August 24, 2017, that Brady Tutton, Chance Perez, Drew Ramos, Sergio Calderon, and Michael Conor were the winning members to form In Real Life. They performed their debut single, "Eyes Closed", at the finale. IRL's first holiday EP, Feel This Christmas / I'll Be Home for Christmas, was released in early November, and they performed on Good Morning America in December.[4]

The group's first 2018 single, "Tattoo (How 'Bout You)" (February), reached 29 on the pop charts. They appeared on the shows Live with Kelly and Ryan and Jimmy Kimmel Live! that same month. In April, "How Badly" was released, their first foray into the mix of Spanish and English lyrics, and they performed it on the show ¡Despierta América!. "Tonight Belongs to You" was released in July, and "Got Me Good" in September, the former attaining two million views for the music video in less than a week. In May 2018, it was announced that the group would open in a supporting slot on the 2018 American Idol summer tour. Later they embarked on their first headlining and international concert tour near the end, Tonight Belongs to You, from October to November 2018.[5]

In 2019, their singles "Crazy AF", "Somebody Like You", and "Hurt for Long" were released. On August 9, 2019, they announced their debut studio album She Do, slated to be released a day before they became a band on August 23rd.[6] It compiled their previously released singles, along with three new songs, one of them being the title track. In October, they embarked on their second headlining tour across the U.S, the For U Tour. Later in November, they released their holiday single, "California Christmas", through their independent label, Broke Hero Records, after finishing their contract with Hollywood Records.

On January 20, 2020, the group announced over their social media that the five of them would be moving forward as solo artists, put on indefinite hiatus.[7] Their message stated,

"Lifelines, - The last two and a half years have been a life changing experience for us. We have gone on six tours, had a billboard charting single on the radio, and dropped our debut album last year. Through all of this, we have gotten a chance to live our dreams, grow closer as brothers as we build an even greater family, our fans. From the hours you all have spent promoting our singles, to camping out days before our shows, you have always been there for us. From the success of In Real Life, each of us individually have received some incredible opportunities that we believe we must take. As we begin this new decade, it is our decision to take up those opportunities, and see what success may come out of them. Each of us possesses a unique talent that we would love to share with the world, so with that being said, we will be starting a new journey as five solo artists. Just as you have supported the group these past couple years, we request the same love from our family for each member of our band. This is not goodbye from “In Real Life” forever, it's just what we believe is right for this moment. We love you all, and look forward to seeing you this year."

★ 4/5 of the members were scouted on Boy Band, but Tutton signed up, thinking it was a scripted series.

★ When thinking of the band name, they came up with ones and chose their favorite.[8] It was later revealed that the producers had several names, and they chose the best one. They recalled one of the producers excitedly suggested the name "Wild Five".

★ Over a Twitter poll, the options for the fandom name were "Lifelines," "Realists," or other. 4/5 preferred the first option, while Tutton argued for the "Realists". The poll ended with 54% in favor for Lifelines.[9]

★ They all want matching tattoos someday.

★ When dressed for Starlight Children's Foundation in 2017 for Halloween, they all went as superheroes.[10]

★ When asking who they'd date in the band if they were a girl, Tutton and Ramos chose Calderon, while Smith chose Perez.[11]

★ Their favorite Christmas songs are: "All I Want for Christmas Is You" (Tutton), "Baby It's Cold Outside" (Perez), "Jingle Bell Rock" (Smith), and "Little Drummer Boy" (Calderon).

★ No one in the band wrote a song to impress a girl, or laughed so hard they peed.[14]

★ Ramos and Calderon are the only ones in the band who have not skinny dipped.[14]

★ They all cheated on a test, texted to a wrong person and broken a bone.[14]

★ One of the artists that the band collectively look up to is Jon Bellion.

★ The band would rather be Santa's reindeer than Santa's elves.[15]

★ According to their band mates, Calderon is the class clown, Tutton is the little brother, Perez is most likely to be Calvin Klein model, Ramos is the nerd, and Smith is the messiest.[16]

★ In Real Life went to Main Event, which had a Virtual Reality place.

★ Ramos and Perez are most likely to slide into a celebrity's DMs.[17]

★ One of the most funniest things that happened to them was on the first day of their tour. They had their mike packs in their ears, but were unaware that the music wasn't playing out to the crowd. They continued performing until Tutton realized what was happening.[19] 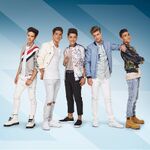 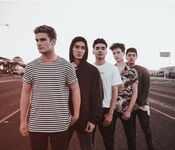 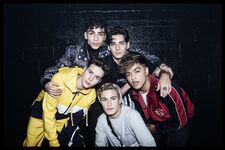