Andrew Luís "Drew" Ramos (born October 23, 1997) is an American singer and 1/5 of the band, In Real Life. He is the eldest member of the group. He is commonly found playing video games in the band, such as Fortnite, Garry's Mod, and RuneScape.[1] He mentioned once on Instagram of creating a game from scratch, and knows how to code using Lua, creating a server during the band summer tour.[2]

Although his parents divorced when he was seven years old, Drew is still close with his father and step-mother. He feels especially close with his mother, declaring that he's a "Mama's boy". He cited his mother to be his biggest inspiration, because throughout his whole life, "she has been there for him even through the hard times and keeping a smile on her face".[4] As a child, Drew travelled a lot with his mother. They moved to Miami, Florida for four years and lived in Las Vegas, Nevada for two years.[5] He sang in church choir when he was young, but never took any professional singing lessons, developing his love of music through worship.[6][2]

In 2017, Drew was contacted about auditioning for the first season of ABC's Boy Band and immediately accepted, which he explained was because he "always thought about being in a boy band".[7] He and twenty-nine other contestants were chosen to fly to Los Angeles and audition in front of a panel of three judges made up of Spice Girl's Emma Bunton, Backstreet Boy's Nick Carter, and Timbaland. Singing Sam Smith's “Stay With Me", Drew went through the competition without being placed in the bottom two or three. His breakout performance during the show was MAXED's performance of Lauryn Hill's rendition of "Can't Take My Eyes Off You", where he found confidence in himself. He was described as the "dark horse" of the competition.

Drew cited some of his influences to be Bruno Mars, Jon Bellion, and Sam Smith.[7]

Drew's dream was to make it big and to get his mother out of their neighborhood to provide them both with a better life. Since graduating Bronx Compass High School, Drew had been trying to contribute financially because his mom is a single parent. Drew worked at Chipotle for three weeks before quitting. He also had an account on YouNow with the username "Dr3ster", though stopped using it, explaining that he was failing his classes while focusing on broadcasting during his high school.

Before making it in the band, Drew performed in New York subway platforms - the shuttle between Times Square and grand central station - and started making $40-$50 every 3 hours. He then realized that his love for singing and based off the response he got from the public that music was something he could do for a living.[8]

Drew dated Shariah True some time near March 2018, though their relationship was never publicly affirmed. They quietly broke things off.

Around Thanksgiving of 2018, Paige posted a picture with Drew, which led to fans speculating that they may be dating. However, this conflicts with the timeline if he was dating Paige during this period, because he announced in an interview in the Philippines (It's Showtime!) that he was single. Either they were friends or it was not publicly announced for privacy reasons. Their relationship was publicly confirmed on January 1, 2019.[9]

Drew has two known tattoos. The first is the Roman numerals of the date that In Real Life formed and Poseidon's trident, which is the symbol he wore on the back of his jacket during the show Boy Band. The second is "NYC" for his hometown, The Bronx, New York. 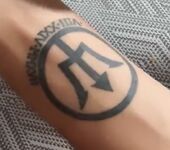 Poseidon’s trident and Roman numerals for Boy Band and formation of In Real Life
on his left wrist.
Date Unknown 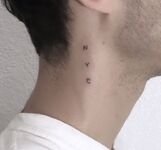 ★ He has a pet pug named Precious.

★ When asked if he wasn't a singer, Drew replied that he'd be a vet or part of animal control.

★ Drew’s spirit animal is a unicorn because they’re "beautiful, magical, and full of joy."[11]

★ His favorite color is purple.

★ His favorite meal of the day is lunch.

★ His favorite food is seafood.

★ His favorite school subject is US History.

★ His mom bought him a karaoke machine as a Christmas present when he was eight or nine years old. That was the time they first moved out of New York to Vegas.

★ According to his band mates, Drew is the messiest one of them all.

★ He has a niece named Sophia.

★ People think he looks like PRINCE and he can do a spot-on facial impersonation of him.[8] 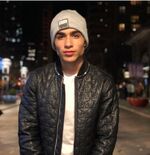 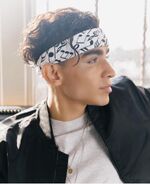 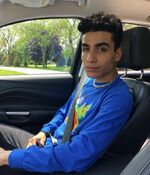