Conor Smith was born in Chicago, Illinois to Dena and Bryan Smith. He stayed there as an infant for three months, before moving to Seattle for four years. He lived in Cleveland for eight years, Reston, Virginia for four years, and returned back to Cleveland. He is from Shaker Heights, Ohio. He has four younger siblings: Kaitlyn Smith (born February 20, 2001), Erica Smith (born January 16, 2004), Patrick Smith (born November 21, 2008) and Brendan Smith (born April 15).

He has been playing the violin since he was six years old, and started rapping when he was eleven, watching Jay-Z's "Empire State of Mind" music video on YouTube. He found Naz, Eminem, A Tribe Called Quest, and Lil Wayne (which was the popular artist at the time) his introduction to the rap industry. He wrote for fun, and never told anyone until he was fifteen.[2][3]

At the age of fifteen, Conor took music more seriously, where people his age were releasing music. He realized that he could do it, too, with it being openly accepted. Throughout high school, he struggled a lot. He sometimes skipped class to write songs, and to play piano. Conor didn't have many friends growing up; only one or two close ones who also wrote music and recorded.[4] When he was sixteen, musical artist Ray Jr. discovered him after finding a video of him rapping in a Twitter video that went viral in his hometown. Ray reached out to him, and helped with recording and music videos which Boy Band found out about Conor through this.

Upon publishing his first track on SoundCloud, Conor said to his mother that he wanted to pursue in music, not as a backup plan, but as his future career. His parents weren't too thrilled with the idea of rapping, because to them it was about violence and explicit lyrics, but Boy Band ultimately led them to be supportive.

For ABC's Boy Band, he was directly messaged on Instagram by one of the producers named Pamela, asking if he was interested in auditioning. He performed on Skype to the producer despite inability to sing, and weeks later flew out to Los Angeles. He auditioned as a rapping-violinist with Machine Gun Kelly's "A Little More". Like fellow bandmates Brady Tutton, Chance Perez, and Drew Ramos, he was never in danger of elimination. Upon winning, he thanked his hometown. In the Shakerite he mentioned that his school counselor, David Peake, and orchestra teacher, Donna Jelen, understood his goals as well as encouraged him toward his passion.[5]

Conor is a classically trained violinist, but his true calling is hip-hop. He has cited some of his musical influences which include Logic, Eminem, Machine Gun Kelly, Future, and J. Cole.[6]

Conor is known as the rapper of the group, and "Tonight Belongs to You" was the band's first single to showcase his vocals. He added that if he rapped in every song, people might think, "Okay, dude. We get it, you can rap."[7] He stated that he wrote his own raps ("point, blank, period") which he expressed in a tweet.[8] "Eyes Closed" was the only rap he did not compose, which he was concerned about during Boy Band, unsure if the band was worth it if he couldn't make his own verses. Initially he began his part with "holy smokes", yet his rap changes when performing live, commonly using his "Six Track" rap instead.

Conor has always been drawn to music, but it wasn't until he was asked to rap for a 7th grade history project that he realized he had a gift for it. The class and his teacher responded so well to his rapping, that they encouraged him to continue.[9] In elementary school, he would always play his violin during music class. During this period, he admitted over an Instagram livestream that he caused a lot of trouble for the teachers, resulting in him and his two friends to be separated into different classes.[10] After seventh grade, Conor grew more rebellious and independent, delving his time into music as well as having a history of stealing.

He acknowledged over an Instagram livestream that he and a few friends in seventh grade stole at Safeway and were finally caught when taking items from the front of the store, where the cameras were. Later when Conor lived in Virginia, he and his friend Chris Arnold attempted to steal a Bluetooth speaker from Best Buy so they could freestyle better. Noticing security at the exit, Conor put the speaker back but they were still caught. They also went to Banana Republic and J. Crew at the Reston Town Centre, "trying on" different clothes, which they got away with. Best Buy was his last stealing spot in Virginia before he moved to Cleveland, where he stole from 7-Eleven. One time he got reckless, and the cashier noticed him. About to get caught, Conor put everything back and ran home. He decided to do the right thing, and told his mother what he did, along with apologizing to the police and cashier. It was the last time he stole, ending in his junior year.[10]

Conor bussed tables before he was in the band, working at B Spot and Dewey's Pizza.[11][12] He got fired at the pizza place before his training was even done, and his other job because of a dress code violation with his t-shirt being too long.[13] At one point in his sophomore year, Conor spent his time in basketball, wanting a career in the NBA. He didn't make the team, but it worked out in the end, because he would not have been on the show. During the second year of junior high school, he started to take online classes. When he was about a week finished, Boy Band contacted him, and he set it aside. Later in June 2018, he graduated.[14]

On June 8, 2019, he revealed that four years ago he was diagnosed with high functioning autism which he has kept as a secret even from his closest friends, due to the stigmatism and being “put in a box”. He has a puzzle piece tattoo[note 1] which he got earlier that year on May 20th for himself and to inspire and give hope to others who also feel that they are given a label from their mental diagnostic.[15]

Going as Michael Conor since Boy Band, Conor explained that he felt that he needed a rap name that would create an identity "bigger than himself". In 2019 he decided to use his birth name, as it got confusing between the two, but more importantly to go in full transition to fully accepting himself.[16] On August 7, 2019, his Instagram username changed from "michaelbmoc" to "conormichaelsmith".

Sometime in May 2018, a person revealed offensive usage of slurs Conor had used when he was younger. He publicly apologized, and made a tweet about it. However, the tweet was seen as a statement rather than an apology.[17] Two days later on May 25, 2018, Conor tweeted again, this time with his sincere apology. "I haven’t said anything for this long because I really don’t know how to fix this situation," the first of the three tweets states. "What I thought was funny when I was 13 is not something I think anyone should tolerate. These things are not a reflection of what I stand for as an artist or as a person. [...] I am truly sorry for my ignorance. Being in the band and seeing and interacting with all cultures and people made me realize how wrong I was, being young and naïve is no excuse."[18][19][20] 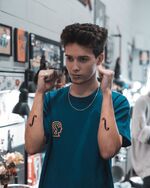 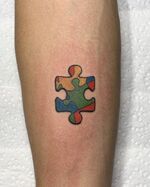 ★ In his former Instagram username, the "BMOC" is what he and his friend, Chris, came up with. "BMOC" stands for "Big Man On Campus".

★ He once admitted over an Instagram livestream that his name could've been Brett.

★ When he lived in Reston, Virginia, he attended Southlake High School as a freshman.[31]

★ His ideal girl is genuine, down to earth, and ambitious.

★ His favorite Disney princess is Elsa.

★ He is in the Gryffindor house, according to the Pottermore quiz.

★ His favorite color is blue.

★ His favorite food is chipotle.

★ His favorite meal is a midnight snack.

★ His favorite school subject was Music.

★ He loves shoes, and even went to a shoe convention.[33]

★ His favorite sport is basketball.

★ His biggest fear is bees. In a livestream he mentioned of getting a tattoo of one to show overcoming fears.[34][35]

★ His guilty pleasure is watching The Bachelor, which he thinks is "stupid but entertaining".

★ He has over 10 years of classical violin training.

★ He broke his wrist in 5th grade.

★ His dream vacation was to go to Hawaii or Italy, and later in April 2019 he went with his family to Hawaii.

★ His raps are written by himself; he feels proud of what he can do. In an interview, he mentioned that he wrote them in a book.

★ He's had a hard time finding a niche in the music industry, not having a lot of performing experience.[9]

★ According to Conor, he has always challenged the status quo and done things his own way.[9]

★ He feels that his peers underestimate him because he's white.[9]

★ On November 10, 2016 he was an opener at the Cleveland House of Blues where he performed for about 12 people. Two years later he performed along with the rest of In Real Life at the same venue, the show was sold out.[36]

★ In elementary school, he had a fight with a boy who he dubbed as "Peter". It began with the boy attempting to trade lunches, but when Conor refused, "Peter" became resentful. Later during recess, the boy knocked his hat off, threw rocks at him, and, after Conor egged "Peter" on, tried to fight.[10]

Retrieved from "https://inreallife.fandom.com/wiki/Conor_Smith?oldid=13571"
Community content is available under CC-BY-SA unless otherwise noted.