In Real Life Wiki
Register
Don't have an account?
Sign In
Advertisement
in: People, Actors, Boy Band contestants,
and 4 more

Brady Patrick Tutton (born December 7, 2001) is an American singer-songwriter and actor. He gained fame after winning the reality music competition Boy Band to become a part of the five-piece group, In Real Life. He was the youngest member.

Brady Tutton was born in Evanston, Illinois[1] to Coleen Tutton (née Mcdonnell) and Sean Merrill Tutton. He moved to Shorewood, Wisconsin when he was four and grew up there. He attended Atwater Elemntary School, followed by Shorewood High school. He has three elder siblings: Ryan Tutton (born March 5, 1995), Casey Tutton (born May 5, 1997) and Jack Tutton (born August 2, 2000).

Brady was born into a very talented family. His brother toured with the Broadway show Oliver when he was 8-years old, so Brady lived the touring life at ages 2 and 3.[2]

Brady Tutton began his career training for opera and acting following his parents and elder siblings, Ryan and Casey, to the stage. They have performed together in a production of The Sound of Music. His mother has been a very active influence on his career since childhood. Some of the videos are posted on her YouTube channel, showcasing a young Brady performing covers of songs like "Lady Antebellum / Run To You" and his solo performance of "It’s So Hard to Say Goodbye to Yesterday".[3] He started acting around the age of seven, beginning with music theatre. His mom heard about the role of "Tiny Tim" (A Christmas Carol) in downtown Chicago. For his audition, a woman chased him around the room and Brady stated that she was crazy. He was given the role.[4]

In 2012, Brady Tutton was cast a small role in the movie LOL, starring Miley Cyrus. This served as a launchpad for his career, as Brady soon found himself appearing on shows like Chicago Fire and Dr. Good in 2013. Around the same time, he also voice-acted the role of Little Jack in the episodes "Doc McStuffins Goes McMobile / Chip Off the Ol' Box" and "Out of the Box / Run Down Race Car" on the TV series, Doc McStuffins.[5] While these smaller roles established him as an actor, Brady Tutton landed his breakthrough role on the hit TV series, Fresh Off the Boat. He made his first appearance as Brock, a middle-schooler and frenemy of lead character, Eddie Huang, in the episode "Pilot" on February 22, 2015. He appeared on a total of seven episodes with “Family Business Trip” airing on September 22, 2015, being the last. In 2016, he had a major role in the movie Sleep, Awake, Forget, playing the younger self of one of the main characters.

Alongside his surging acting career, Brady Tutton has found even more success with his singing. Both of his parents supported this. His father realized his talent at a Milwaukee Children's Choir concert back in 2011. "That was when I stopped and was like, 'Whoa. Let's support this and see where it goes'," Sean Tutton said to Milwaukee Journal Sentinel.[6]

In June 2017, Brady appeared as a contestant on the ABC‘s reality-singing competition Boy Band. He found out about the show online, thinking it was a scripted series. When he heard it was a reality show, he initially said no, but later flew out.[7] On August 24, 2017, Brady alongside Drew, Chance, Sergio, and Michael emerged as the winners of the competition and received a recording contract with Hollywood Records. The five formed the band In Real Life and in September 2017 released the music video of their debut single, "Eyes Closed".

In 2018, Brady starred the leading role in the movie, The Rocket. He found out about the movie, applying on a website Actor's Access. His mom read the script, and fell in love with it. He auditioned, and got an email, being on hold. For the film, he had to work out a lot. In one particular scene of the movie, he had to chase after the gator on the camera, doing it for an hour and a half.

He has made it a point to differentiate himself from his siblings by getting into R&B and hip-hop. He studied classical music since he was 12-years old, and can sing in Italian, German, and French.[8] He has cited Frank Ocean to be his inspiration, mentioning the artist in multiple interviews.[9]

As a child, Brady suffered from stuttering and tried to avoid talking at school. Singing was the only time he wouldn't stutter, so it became his favorite thing to do.[10]

★ He can do backflips, which is shown when performing "Tonight Belongs to You" live.

★ He has a fear of crossing the street.

★ Oreos are his midnight snack.

★ He doesn't like people who take their shoes off on airplanes.

★ He hates people who smoke, which is a turn-off for him.

★ His favorite color is salmon, black, white and grey.

★ His favorite song from Ariana Grande's album Thank U, Next is "Break Up with Your Girlfriend, I'm Bored".[16]

★ He has seen every Harry Potter movie roughly sixteen times, and his favorite is either the third (Prisoner of Azkaban) or fourth (Goblet of Fire) film.

★ He is in the Ravenclaw house, according to the Pottermore quiz, but once mentioned on an Instagram livestream that every quiz he took he was in Slytherin.[17][18]

★ His favorite food is seafood.

★ His favorite meal is lunch.

★ His favorite cereal is cocoa puffs.

★ He hates the taste of popcorn, stating it tastes like cardboard with a lot of fat.[19]

★ He suggested that the fandom name be the 'Realists' instead of the 'Lifelines'. However, the poll on his Twitter page ended in the latter by 54%. He later agreed that 'Realists' wasn't the best name.[20]

★ He has won at multiple choir competitions throughout the state.[8]

★ He loves to cook and his specialty is a family recipe-pasta dish with mushroom sauce.[8]

★ He thinks that if animals could talk, pigeons would be the rudest.[21]

★ His favorite song is "White Ferrari" by Frank Ocean.[21]

★ His favorite pair of shoes that he owns are Heelys.[21]

★ His older sister, Casey, has a recurring role on the television show, Chicago Med.[22] 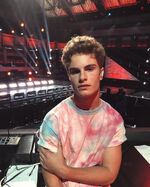 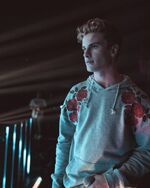 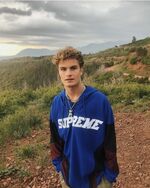